We made it! Exactly one week ago, with help from Alison Qualter Berna, Brad Graff and me, Dan Berlin made history, becoming the first blind runner to ascend the Inca Trail nonstop to Machu Picchu. It took us 13 hours to complete the trek, which normally takes 4 days. 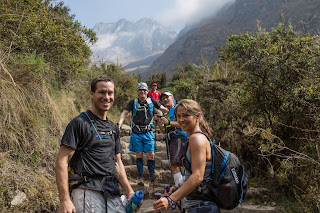 We were helped enormously by our innovative and resourceful sponsor, Intrepid Travel. The Inca Trail has strict regulations, and Intrepid was able not only to secure the required permits for our team. They finessed special permission for us to start before dawn so we would have a chance to complete the trek in time to reach Machu Picchu by sundown. Intrepid embedded a videographer in our group named Lucy Piper (with the big smile, 2nd from the right). 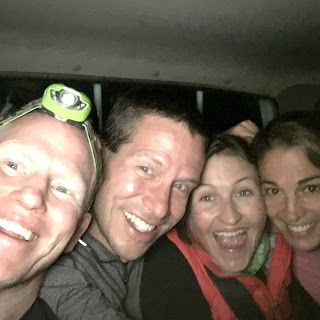 Check out Lucy's cool pre-trek video below, which shows that we were about to get more than we bargained for… Lucy is an impressive Ironman triathlete from Australia, and she completed the exhausting endurance challenge alongside us, filming throughout – impressive! 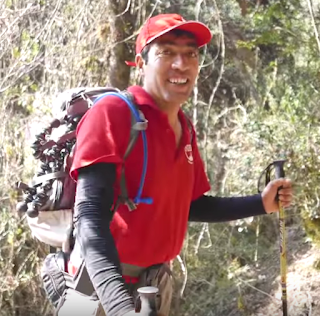 He told us what we were attempting to accomplish was not impossible, but extremely difficult to pull off for even the fittest of runners. He added that local officials thought it was crazy to try such an overwhelmingly difficult thing, and they could not believe that a blind person would even attempt it.

We left the trailhead at 4:30 a.m. running with headlamps in the pre-dawn darkness. 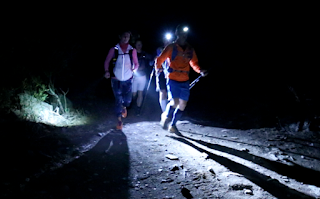 We needed to make it to the final check point by 4 p.m. in order to be allowed to continue on to Machu Picchu (another 2 hours away) by sunset. If we didn’t arrive in time, we would be required to spend the night in a campsite and finish our route the following morning.

The trek was challenging to say the least: rocky, narrow paths that took us over three mountain passes, winding alongside dangerous drop offs high above a distant valley. The Incas did not use switchbacks, which meant the ascents were often brutally steep, and the precipitous descents were genuinely frightening at times. We climbed as high as nearly 14,000 feet above sea level, which made it hard to breathe in enough oxygen for our fatigued muscles. 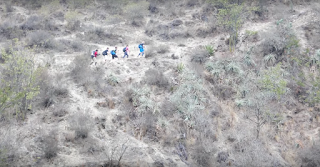 After reaching the first mountain pass in mid-morning, Elyas looked worried. We were already an hour behind schedule. The steep ascents were sapping our strength, and it was too treacherous to go quickly much of the time. The steep descents were particularly hard on Dan, who was at constant risk of falling or snapping an ankle.

Elyas urged us to move faster, but we had to prioritize keeping Dan safe. Our typical guiding technique had been for a lead guide to call out obstacles to Dan, who followed behind using hiking poles to feel for the upcoming obstruction. Another guide followed closely behind to grab Dan if he stumbled. This worked on well-maintained trails but wasn’t ideal if the terrain became too technical. A few weeks earlier, Brad and Dan had come up with a creative guiding technique during a training hike up and down two rocky, scree-covered 14,000-foot peaks in Colorado: Dan held on to the back of Brad’s backpack, which provided more stability than our normal technique. But even that approach was not allowing us to go as quickly as we needed on the Inca Trail.

Alison and I came up with a new guiding technique inspired by the trapezoidal construction the Incas used to provide stability to their impressive stone structures. The two of us joined our inside hands and used hiking poles in our outside hands to provide a broad base, while Dan held on from behind to each of our backpacks. 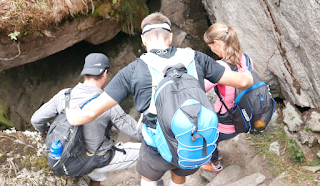 This allowed us all to go much faster. Brad followed closely behind to grab Dan in case he fell backward. Sometimes Alison or I slipped, and Dan helped pull us back up - it was a satisfying turn-about for him, I'm sure, to help one of us instead. Alison, Brad and I swapped guiding positions from time to time in order to give one another a break. I could tell Dan was challenged and perhaps intimidated by the terrain, but he didn't complain or give up. He's a remarkable person.

Brad had injured his heels two days earlier while sliding down a steep rock. He was in pain throughout our trek, especially on the descents, but he gutted it out. He's a resilient guy, and I was impressed. 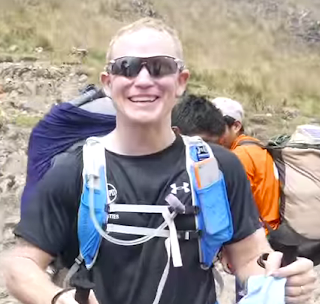 The day before our hike, as she felt the strength-sapping effects of being at high altitude, Alison nearly broke down in tears. Facing the non-stop demands of raising 3 young children and being the co-founder of apple seeds, a children’s play space in New York City that is in the midst of launching a massive national franchise, her busy life made it difficult to train for our ambitious trek. Alison worried that she would not be able to keep up with the group. But when the time came, she rose to the occasion. 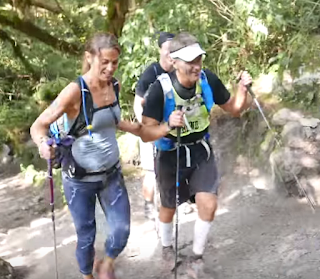 We all pushed as hard as we could while ensuring that Dan stayed safe. We arrived at the checkpoint at 3:58 p.m. Two minutes to spare!

The buzz had spread about what we were trying to accomplish among the Peruvian authorities and local population, and the rangers at the checkpoint were so excited to see us, they applauded and asked to take pictures together. 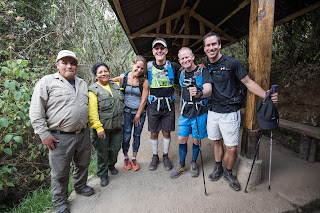 We made it to an overlook of Machu Picchu nearly 2 hours later, just as the sun was disappearing behind towering mountains off to our left. Glowing clouds obscured the sunset and gave the ruins, which were laid out below us, an eerie feel. 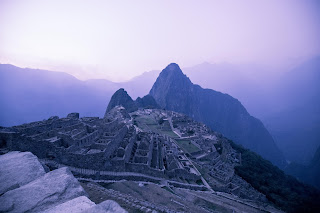 I felt elated and relieved to have completed such a tough challenge. Looking out at the complex of gray rock structures built so long ago by a civilization that could not defeat the conquering Spaniards, I was grateful the Incas had left behind such a marvel of ingenuity and beauty. Machu Picchu at dusk was majestic - and devoid of human brings because the last tourists had already left. It was a rare privilege to see the site without any other people there.

We celebrated with hugs and photos and paid our respects to Pacha Mama - Mother Earth in the Incan religion – for keeping us safe. 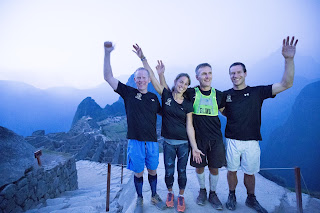 Then we all got choked up as Alison read aloud from the loving letters her children had tucked into her backpack. Her kids praised her for being a role model and said how proud they were of this accomplishment. I’d say: lucky mom and lucky kids…

As Machu Picchu was slowly being enveloped by darkness, I felt a deep sense of gratitude for Dan, who had decided to become an endurance athlete after going blind. It felt strange to think it, but I was actually glad he lost his vision. Horrible thing to think, right? But I believe Dan is having a greater impact on this world than he would have had he not lost his sight. In his reaction to such a personal tragedy, he’s become a role model for others facing their own tragedies and challenges.

This became obvious in the days immediately following our feat. Alison had worked at UNICEF in the past and brought them on board as one of our sponsors. Thanks to outreach by the local UNICEF office, Dan became a mini-celebrity. The Peruvian press embraced the story, and Dan was interviewed by TV and radio stations, magazines and newspapers. 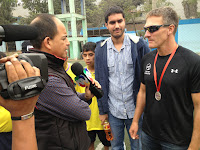 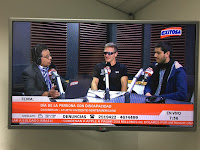 We've also received coverage from Outside Magazine, Trail Runner Magazine, The Denver Post (goes live on Oct 23), with more in the works!

UNICEF arranged a visit to a school in Lima for blind children and young adults. Following presentations by a government official and a representative from UNICEF, Dan gave a moving presentation, encouraging the students to treat their blindness as an inconvenience to overcome rather than a disability preventing them from setting ambitious goals. 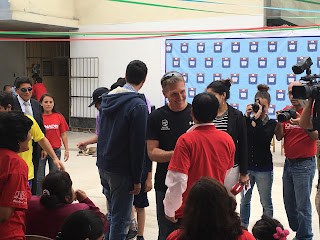 I imagined that one of the students listening to Dan might decide to ignore the limitations placed on her by the expectations of society and dive fearlessly into her own adventures. Maybe 30 years from now, she’ll be president of Peru…

We were joined in Peru and got lots of love and help from Lisa Graff (Brad’s wife), Sheila Berlin (Dan’s wife) and their beautiful children Talia and Kyle. 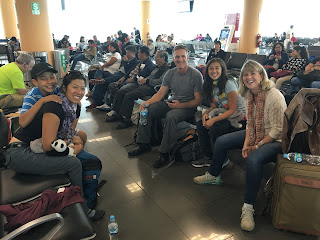 I’m deeply grateful to my wife Eiko and our kids Sho and Saya for supporting me in this crazy endeavor. And I want to give a big shout out to our fabulous sponsors Intrepid Travel, UNICEF and Altra Running.

We’re raising money to support the Blind Institute of Technology (which helps companies integrate vision impaired employees into the workplace). If you’d like to make a contribution, please go to: www.teamseepossibilities.com 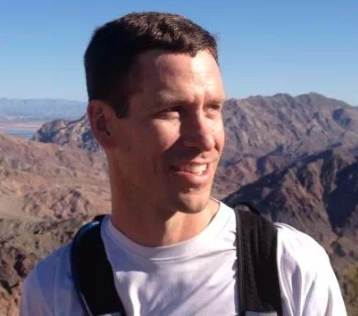 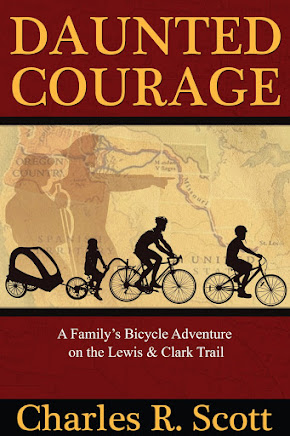 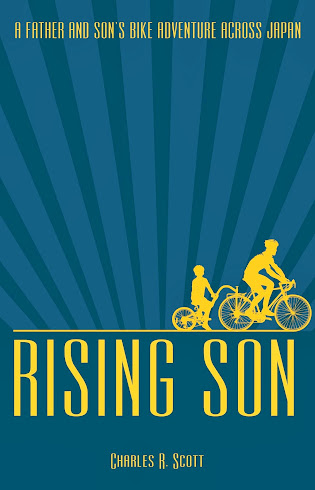